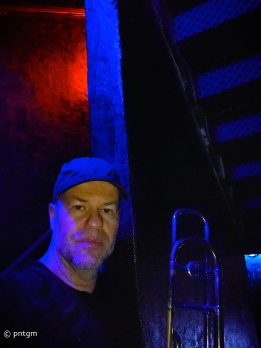 WP, the improvising and composing musician (trombone, conch shell, voice, noises), called "the alchemist of the sounds" in a review, has founded several groups with outstanding line-ups and unique sound conceptions, and performs live from solo up to orchestra size.

WP, the photographer, video artist and designer, creates numereous photo series (e.g. 'inter.views'), artistic documentaries of cultural events and works of graphic-design to order, and normally takes the responsibility for the artwork of his own

Born 1964 in Bad Radkersburg (A), WP is based in Linz (A) but annually also spends several months for temporary artist residencies, e.g. in South-East Africa, East Asia and/or North America. He studied 'visual media design' at the University of Art in Linz (honors degree 1992). During that time he also took part in numerous workshops with international masters of jazz at home and abroad.

Or connect on WeChat: